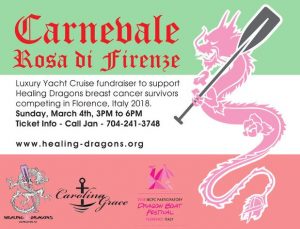 In just a few weeks an Italian style fundraising event will rock the shores of Lake Norman raising money for a great cause, the breast cancer survivor and supporter team Healing Dragons.

This fundraising event will raise monies for the Healing Dragons team, which will be participating in the 2018 International Breast Cancer Paddlers’ Commission (IBCPC) Participatory Festival.

The international race is held every four years, and this July it will be in Florence, Italy, 120 teams from around the world are expected to attend.

“Carnevale Rosa di Firenze will be unlike any other event in our area as the Carolina Grace will be transformed into a festive, celebratory and fun floating venue for this unique fundraising event,” said Marlah Ebert, president of the Healing Dragons team and co-captain of their Florence team.  “Where else can you watch an amazing sunset with 100 other non-profit supporters while floating on Lake Norman in March?!”

The night will feature all things Italian, including food, entertainment, and décor. A silent auction and raffle will feature items like custom designed jewelry, local hotel stays, restaurant gift certificates, and tickets to the Opera.

Event tickets are on sale for $100 per person and are limited to the first 100 sold.

If you’re interested in attending this event which will be held Sunday, March 4th 3 – 6 PM please contact:

Donations can be made to Healing Dragons Inc.

Founded in 2009, Healing Dragons’ mission is to “inspire, encourage and support survivors of all cancers to triumph over the disease.” Through the collective and collaborative efforts of the team, the sport of dragon boating and team members and supporters’ commitment to health, mental and physical wellbeing, the non-profit’s goal is to improve cancer survivors’ quality of life. Education and community involvement are also a part of the organization’s vision.

The team practices on Mountain Island Lake and annually participates in at least six races throughout the southeast. Each year, the team kicks off its season in May at the Asian Festival on Lake Norman. Healing Dragons of Charlotte is sanctioned as a 501(c)3 non-profit organization.

About the Sport of Dragon Boating

Dragon boating is the fastest growing water sport in North America. The sport has been in existence for over 2,000 years and as history goes, the earliest races were in China and were rooted in training for naval warfare. Moving forward to the 1970s, the British-controlled government of Hong Kong started dragon boat racing as a way to attract tourism. Interest traveled throughout Europe, Asia and Canada with local festival races being held.

Dragon boats are human-powered watercraft.  Traditional dragon boats are 40 feet in length with ten seats, the 22 team members include side by side paddlers, a drummer/caller and steersperson. There are also ten person boats.  The length of races vary by venue and race conditions but typically range from 250 meters to a 2,000-meter finale.

In 1996, Don McKenzie, a sports medicine specialist in Canada, started the first breast cancer survivor team called “Abreast in A Boat.” It was his belief, and his research confirmed, that the sport would benefit breast cancer survivors through upper body and core strength training, lessening of lymphedema symptoms, team member support, commitment to wellness and the social aspects of being part of a team. In a very short period of time, the IBCPC was founded and now, over 166 teams from five continents are part of this organization. The organization’s international dragon boat festival will be held in Florence, Italy from July 6-8, 2018 and 120 teams, from throughout the world, will participate.

The Healing Dragons team welcomes new members and provide training. They encourage all cancer survivors and supporters to join and will start practices in late March/April depending on weather. Team members do not need to commit to the races.